2019 –  29 Partners
Ongoing support for Live4Life, Kids Like Us and Youthworx

2018 –  28 Partners
Live4Life and Kids Like Us joined as new investees, with Youthworx

2017 –  25 partners
Youthworx became our next Investee, along with ongoing support for Good Cycles

2016 –  26 Partners
We continued to work with Good Cycles, 100 Story Building and ICAN Network

2013 – Margi Olson introduced the USA concept of Social Venture Partners to Melbourne by bringing together a group of 8 individuals to establish SVP Melbourne. The constitution was developed, financials were set up and company and charity registration occurred.

Around 2010, I was newly retired from full-time work and looking for a role in the NFP sector.  Like many people who spent their whole working life in the corporate world, I knew nothing about how to get started.  I was living in Boston at the time, and a friend brought me along to a meeting of the Boston chapter of SVP.  It was the night a new investee was chosen, and three prospects gave a pitch to a roomful of about 50 people, most late-career professionals or newly retired.  I was very impressed but for a reason I don’t remember, I didn’t join.

In early 2012, a former executive I had known in my consulting days in Melbourne contacted me and asked me to do a piece of consulting work for him.  He was chair of the board of  a charity that had been around for 100 years.  He had learned about the then relatively new concept of Venture Philanthropy and was keen to transform his charity to a Venture Philanthropy Foundation.  My assignment was to research various pathways to achieving that and convince the other board members to come along for the ride.

The Foundation he sought had three fundamental characteristics that differentiated it from traditional philanthropy:

As I was doing research on the model and some of the existing leading organisations, such as Impetus Trust in Great Britain and Robin Hood in New York, I remembered Social Venture Partners and went back and did extensive research on the model.  I then proposed that the charity “transform” itself to become SVP Melbourne.  (In retrospect, this would have been an ideal structure because it would have started out with a corpus).  The board rejected that approach but eventually did transform itself based on the three fundamental characteristics he had defined.

So I said, why not do it anyway?  I recruited two friends (one being Marianne Broadbent) to become the other two “founding partners”.  We contacted SVPI in Seattle and had many long discussions with Ruth Jones, who was then ED of SVPI (and is now a Melbourne partner).  We also had many discussions with anyone who would talk to us, including Australian Communities Foundation and many others.

Our goal was to recruit a total of ten Founding Partners.  It took nine months and many conversations, but suddenly there were ten people at my dining room table, committed and eager to get started.  They included Wayne Saunders and David Green, and Robert Broadbent of course, as well as Marianne.

Then we got the catalyst we needed for a real “kickoff” – SVPI Chair Lance Fors would visit Melbourne for two days in May, and give the entire two days to our agenda.  The founding partners worked tirelessly for three months to plan events and get out invitations.  The events  included a presentation at ACF, a lunch hosted by Morgan Stanley, and a cocktail reception hosted by Leadership Victoria, and  an interview by John Thain on the ABC.

But the crowning event was on the evening of the second day.  This was billed as “friends of the Founding Partners” and that is exactly what it was.  It was held in the Boardroom of EWK (Marianne’s company) overlooking the top of Collins Street, and it was packed.  The excitement was palpable.  Lance was brilliant, and there was a wonderful vibe.  We left that evening with commitments of over twenty-five people, including current long-standing partners Ian Adair, Paula Giles, Paul Higgins, and Mark Jankelson.

Social Venture Partners Melbourne was off and running! 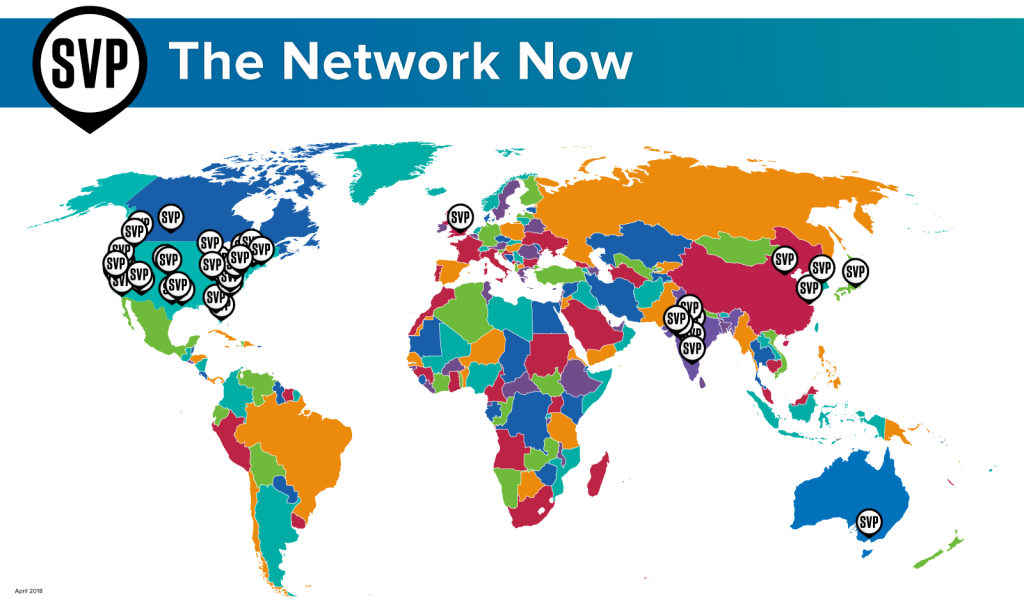 Social Venture Partners Melbourne is part of a global movement, one of 40 Affiliate organisations across 8 countries. SVP International works to strengthen, connect and amplify the impact of SVP Affiliates by providing tools, resources and bringing our partners and staff together to learn and grow.
It started with one person. In Melbourne our one became 10 and now over 27 partners, who pool their funds and their skills to assist as many innovative not for profit organisations who’s mission is to assist disadvantaged and marginalised children and young people to help them optimise their future.

That’s SVP Melbourne. A global network of local partners aligning passion and purpose. We don’t just write cheques, we share the intellectual powerhouse that is our partner base and open up our networks. Social Venture Partners International amplifies the impact of those out to do good – connecting and supporting donors, not for profits and social enterprises so we can make greater impact together.

SVP is both local and global.

Our partners are part of network of 3,400 philanthropists in more than 40 cities around the world. They share common ideals, similar struggles, and can tap into a wealth of knowledge through network-wide conferences, online resources and virtual cross-city forums made possible by SVP International.
40+ affiliates, 8 countries, over 3,400+ partners, $70M to 900 capacity-supported not for profits.

Find out how you can