The latest official data shows Australia’s charity sector was robust immediately prior to the advent of COVID and the 2020 bushfires, employing 11% of Australia’s workforce and generating revenue of $166 billion.

It analysed the most current data available, submitted to the regulator by more than 48,000 charities in their 2019 Annual Information Statements.

The report shows charities employed 1.38 million people and sector revenue grew by 6.8% compared with the previous year. Government funding accounted for $78.1 billion, an increase of $4.4 billion. ACNC Commissioner Dr Gary Johns said there was also a $1.3 billion rise in donations, a testament to public confidence in the work charities do. He said the report sets an important benchmark.

“The data certainly indicates that up until the end of 2019, immediately prior to COVID and in the lead up to the summer bushfires, the charity sector was robust, with increases in revenue of $10.5 billion and in assets of more than $30 billion compared with the previous year. Overall, charities operated at a surplus, supported by substantial assets”.

Charities distributed $7.2 billion in grants and donations within Australia, up 27% on the previous year, and distributed just under $2 billion overseas, a 20% increase. As charities’ financial years vary, this edition of the Australian Charities Report comprises information from charities with a financial year between 1 July 2018 and 31 December 2019.

When I first joined SVPM, the first organisation I was introduced to was Good Cycles. I loved the focus they had on both providing skills 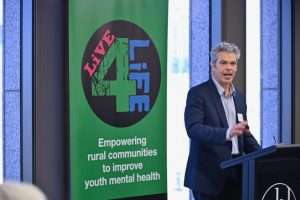 At SVP Melbourne, we are proud to again support Life4Life this year.  This is especially important during this time, as many young people’s lives are