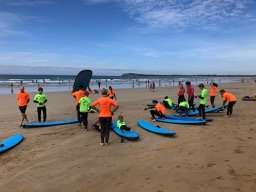 Ocean Mind kicked off 2021 with a school holiday surf therapy program at Ocean Grove in January. Ten young people took part in the two-week program, each supported by a mentor. Program facilitator, Will, and Surf Instructor, Isabell, provided the activities and how-to-surf guidance.

Ocean Mind ran a training day for the mentors at Torquay before Christmas. The morning session covered the purpose, objectives and approach of the surf therapy program; outlined participant needs and considerations; and explained mentor roles and responsibilities. The afternoon session was to take place in the water with the surf instructors, but was cancelled at short notice as the beach closed during the day due to a shark sighting at Torquay Beach.

Rosemary Cleland was one of the mentors. She found the training first rate, noting “it was professionally run with concise information and clear goals”. When it came to the surf therapy program itself, Rosemary enjoyed being part of the cohort of instructors, participants and other mentors, but found it especially rewarding working one-on-one with her assigned mentee. “I learned a lot about him and from him” she said, “as well as seeing first-hand how Ocean Mind’s program benefits its young participants and their parents, guardians or carers.” Rosemary saw a big change in her mentee during the program. “He went from being afraid of waves to being able to negotiate surf and ride the waves. He commented that over the two weeks he had become fitter and more energised in life generally, and told me he had been catching up with friends on the days between program sessions rather than staying home playing on his devices. And as the program progressed I noticed he had taken to sitting on his board ‘out the back’ — he told me it was so quiet, calm and peaceful out there. The camaraderie between mentors helped create an atmosphere of fun and achievement for the mentees. The joy on their faces when catching their first wave was amazing, as was their increasing confidence over the fortnight. It was truly rewarding for all involved.”

Ocean Mind’s second surf therapy program for the year began on 13 February and runs for six weeks through to 20 March.

If you are interested in supporting Ocean Mind’s surf therapy programs by becoming a mentor (or perhaps working with Ocean Mind in some other volunteer capacity) you can register your interest on their website.

SVP Melbourne as a Case Study

Giving Circles Asia has used the SVP Melbourne story as a case study of setting up a philanthropic venture in Australia. You can read the

Welcome to WordPress. This is your first post. Edit or delete it, then start writing!